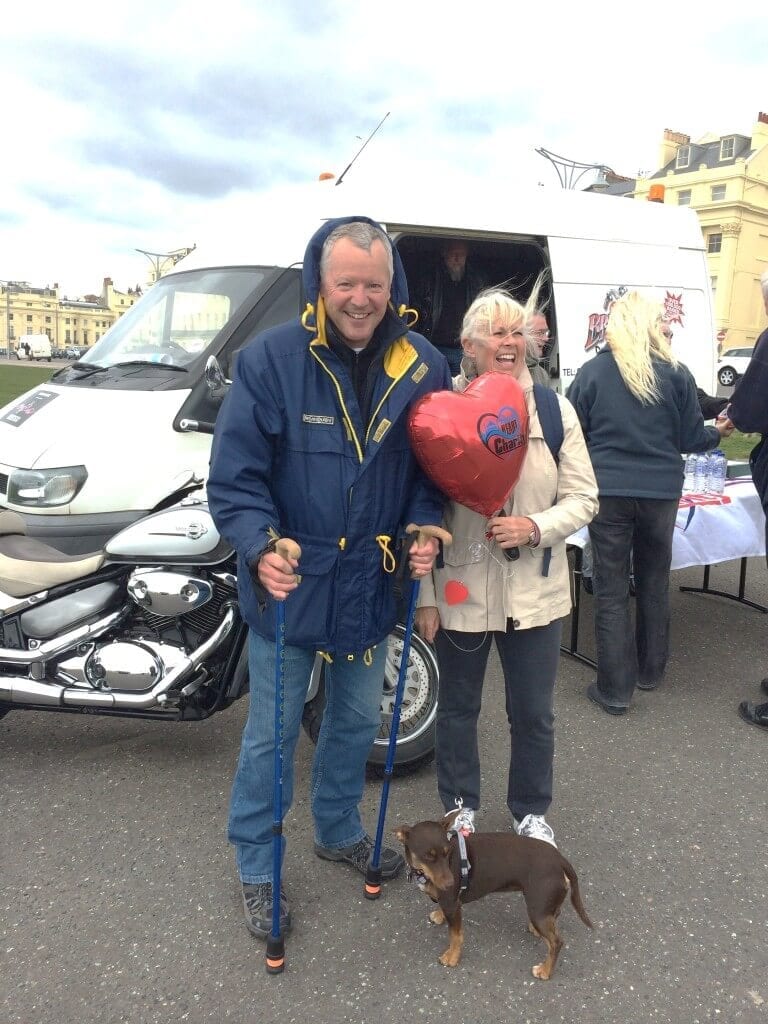 FlexyFoot is a new invention which enables people of all ages and abilities to exercise their legs and upper bodies with safety in different circumstances. It’s a hand-held exercise pole with a flexible foot. The same pole can be used by outdoor hill walkers, rollerbladers, skateboarders, and less able bodied people who have limited leg mobility or need extra stability. It’s a multi-purpose exercise stick for all seasons.

One For All and All for One. Amazing and True!

I’m an active person and enjoy walking on the South Downs, conveniently located at the bottom of my garden in Rottingdean near Brighton. I’m a charity runner for the British Heart Foundation and walk for the Sussex Heart Charity to help raise funds for local heart defibrillators in public places.  Flexyfoot was easily adjusted to my height and very light to carry any distance. 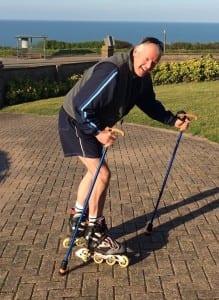 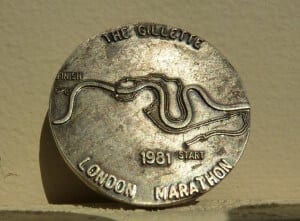 I’ve been running long distance since the age of 12 and did the first few London marathons. However A few years ago I was diagnosed with atrial fibrillation, a chronic  heart condition which causes 100,000 deaths in the UK every year. Exercise for anyone with a heart condition is a vital life-saver, and of course exercise can prevent many conditions arising. In my case I was told my survival was because I was already fit, and needed to remain so.

I’d stopped running 15 years ago and took up rollerblading so had the chance to put Flexyfoot through faster and harder paces than usual.

My route takes me 20 Kilometres up and over the White Cliffs from Rottingdean to Hove with a 70 metre vertical height traverse. Flexyfoot copes well uphill and downhill with steep gradients. 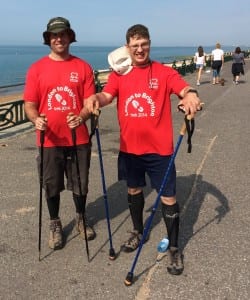 I’ve met just about every type of walker including those who walk London to Brighton every year. They all wanted my sticks instead of their own. They liked the springs which soften impact on the arms to avoid repetitive strain “tennis elbow”, the movable rubber ends for mobile traction, and the handle grips for comfy holding.

Since 2014 I’ve been using Flexyfoot every week. Summertime I travel 60 kilometres each week and about half that in the winter so I reckon I’ve taken them about 4500 kilometres in two years. That like from UK to Timbuktu. The original rubber ends are holding up well and although replacements are cheap I think I’ll get another 1000 kilometres. Better then Pirelli tyres! 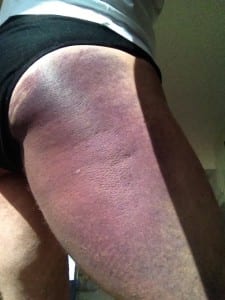 Flexyfoot also helped me out when I tore my hamstring just before a long haul flight to see my son get married in Antigua. Grade 3 tears can be rather painful but I was back up and walking after just a few weeks. It bore my weight very well to avoid further injury.

However I’d also had a dodgy past with Atrial Fibrillation “AF” of my heart. My upper and lower heart chambers were out of rhythm. In March 2012 AF was diagnosed when by chance being examined for a routine check-up my pulse was found to be 33 beats per minute and about to stop!

Off to Hospital A and E where they tried Cardioversion (stopping and starting my heart). No luck with that so I was fitted with a dual chamber pacemaker. No anaesthetic was allowed as they had to keep me chatting during the op in case a blood clot and stroke occurred.

I took a photo of my own monitor showing a Zero pulse for 10 seconds EVERY minute.

However my chronic heart condition deteriorated during 2014 with daily fibrillation episodes lasting up to 9 hours each time. I maintained Flexyfoot use and in March 2015 I began wearing a microcurrent device on my ankle at night from Arcequine to systemically reboot the body cellular ATP energy. 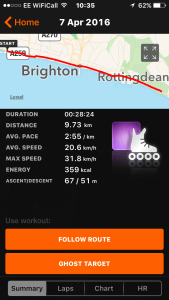 From the above scores you can see my fibrillations stopped in July and my heart rhythm, blood pressure and pulse all began to stabilise from then. Thanks to a combination of Flexyfoot exercise, healthy diet, herbal drinks and my wearable microcurrent device from ArcEquine.

My only concern is that with Flexyfoot keeping me upright in all conditions I’ve found that my speeds are becoming a bit scary! Oh well you can’t have it all your own way!

So what’s the score after a two year test drive?

I had a big helping hand from a little wearable device on my ankle supplied by Applied Microcurrent Technology. It regenerated my heart and hamstring tissue whilst I slept. I can now run and jump like never before!. Their simple wrap around product proved to be a very safe bet. See https://arcmicrotech.com/arc4health/

The moral of the story is to combine wearable new technology on your outside with the latest blends of herbal health drinks on your inside.

You’ve got nothing to lose if your hearth and health are on the line!

This site uses Akismet to reduce spam. Learn how your comment data is processed.