Brighton fashionistas have entered the Guinness book of records after creating a giant PomPom in the build up to next month’s Brighton Fashion Week.

The mammoth pompom, which weighed a staggering 1.5 tonnes, was created from used clothes which will now be recycled back to new garments by Bag2School and Bag2TheFuture. 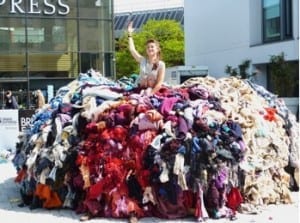 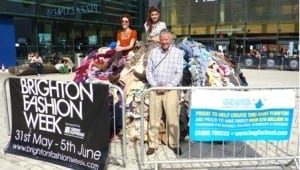 The record breaking creation in Jubilee Square was unveiled on 6th May and measured in at a whopping 13ft 4in wide and 5ft 6in high and took 200 hours to create.

Among the names given to the PomPom from passersby were King Pom, Pompompidou, Pomzilla and Atompom.

Clive Bonny, a Fellow of the Royal Society of Arts, Manufactures and Commerce who helped sponsor the record, said: “We need to create more awareness to reduce the throw away mentality and refashion old garments into new items. The UK is a world leader in creative design and fashion and many of our schools can develop young people’s enterprise skills by taking used clothes from the local community into their fashion and textile classes.”